In Idunn Mons on Venus: Location and extent of recently active lava flows, Piero D'Incecco and his colleagues looked closer at 1 µm thermal emissivity anomalies on the eastern flank of Idunn Mons, as observed by the VIRTIS instrument on Venus Express. Hypothesizing that recent lava flows were responsible, they overlayed the VIRTIS emissivity data with SAR images from the Magellan mission to look for lava flows that may have resulted in the high emissivity. They created a geologic map of lava flow units on the eastern flank, creating outlines on Magellan SAR images. They then used software that models the best fit of emissivity data to the flow areas.

They conclude that the lava flow units on the eastern flank of Idunn Mons are likely responsible for relatively high 1µm emissivity observed by VIRTIS. This is consistent with their reconstructed stratigraphy (i.e., relative ages) of the various lava flow units. They also note that the average microwave emissivity of the lava flows is consistent with dry basalts (i.e., cooled volcanic rock), and also may indicate limited chemical weathering.

Their data are consistent with lava flows that are young enough that they have not experienced significant weathering, and may represent recent or even active volcanism on the surface of Venus. The authors look forward to new data to be collected by VERITAS, a Discovery Program finalist mission that sadly, was not selected.

Two tables (one for day side observing, the other for night side) provide opportunities across a "spectrum" of wavelengths, indicating what products are likely involved, the altitude being observed at that wavelength, and the suspected processes occurring there.  Citations to previous work at the various wavelengths are also provided.

The paper is available to all under a Creative Commons License. 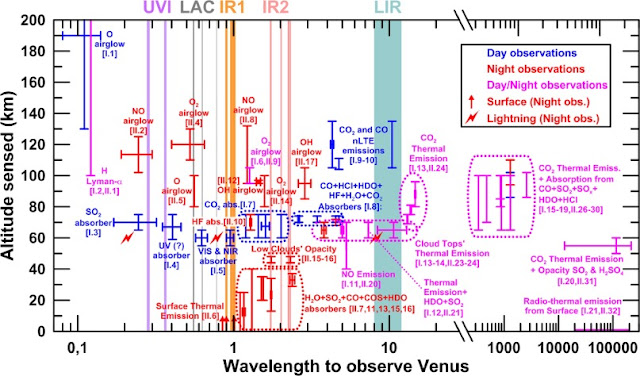 Bright highlands in equatorial Venus likely ferro-electric. What's up with the high-latitude highlands?

A lot of papers have been written about the highly reflective highlands (in radar) on Venus, with several different hypotheses (e.g. high porosity, metal frost).  Allan Treiman, Elise Harrington, and Virgil Sharpton look specifically at high-latitude highlands in comparison to highlands in the equatorial regions.  Both areas feature high reflectivity, but the reflectance patterns are distinct, as they describe in Venus' radar-bright highlands: Different signatures and materials on Ovda Regio and on Maxwell Montes.

They have confirmed earlier studies showing that the reflectance pattern seen in equatorial highlands
(such as Ovda Regio) are consistent with a ferro-electric substance, likely chlorapatite.

The reflectance patterns on Maxwell Montes (~60°N) are different.  The backscatter abruptly transitions from low to high at the previously identified "snow line" (~4.5km elevation), and stays high above that point.

They believe this pattern indicates a semiconductor material.  How did it get there? Either by precipitation from the atmosphere (frost?), or it formed as the result of a chemical reaction between the surface and atmosphere.

At the very least, their research shows that even though the highlands of Ovda Regio (equatorial) and Maxwell Montes (high latitude) are similarly reflective, they are caused by different materials or processes.

The authors urge (and I agree) that lander missions with geochemical analysis instruments be sent to multiple highland locations.

Discovery of a 150 day period in the Venus condensational clouds

Using near infrared (NIR) data from the VIRTIS instrument that once traveled aboard the Venus Express spacecraft, Kevin McGouldrick and Constantine C. C. Tsang found a periodic variation in radiance, most intense at the mid-latitudes.  The paper is here.

They identified A 150-day periodic variation in radiance within the 1.74 µm and 2.30 µm windows, which is most pronounced between 30° and 60° latitude.  They also found that in these mid-latitudes, radiance at these wavelengths steadily increased throughout the life of the instrument.

The 150-day timescale is consistent with a model (developed by McGouldrick) of the Venusian condensational clouds vertical structure, driven by radiative-dynamical feedback.  I'm not sure what that means, but thank goodness the paper is open source!

Thursday afternoon at #LPSC2017 was Venus time! Thirteen oral presentations were presented, including topics such as:

You can read the program which includes links to all the abstracts.

Posters, too!  Yes, there were a 28 posters dealing with science and future exploration of Venus.  The program with links to abstracts are available for these, too.

Six of these posters were uploaded to the LPSC website for you to see.  Here are direct links to two of them: